The History of Dude Ranch Memorabilia

A recent blog post here on the Dude Ranchers’ Association website mentioned four ways to help dude ranches while we’re all stuck at home and unable to visit our favorite places. One of these was buying memorabilia, whether it’s a tee-shirt, a cap, or a coffee mug. Souvenirs are a long-standing tradition in the history of dude ranching, and here’s a look at some of the interesting ways ranchers have helped their guests take home some memories.

By the early 1930s, ranchers were designing and printing up brochures. These had details about which railroad line to take, what the cabins or rooms looked like, what clothing the dudes should pack, and, of course, a list of activities. Some were very plain, with just the raw information, but most ranches used photographs to liven up their brochures. Potential guests picked these up back East in travel agencies and railroad stations, but many people kept the brochures even after their vacation was over, adding them to scrapbooks. 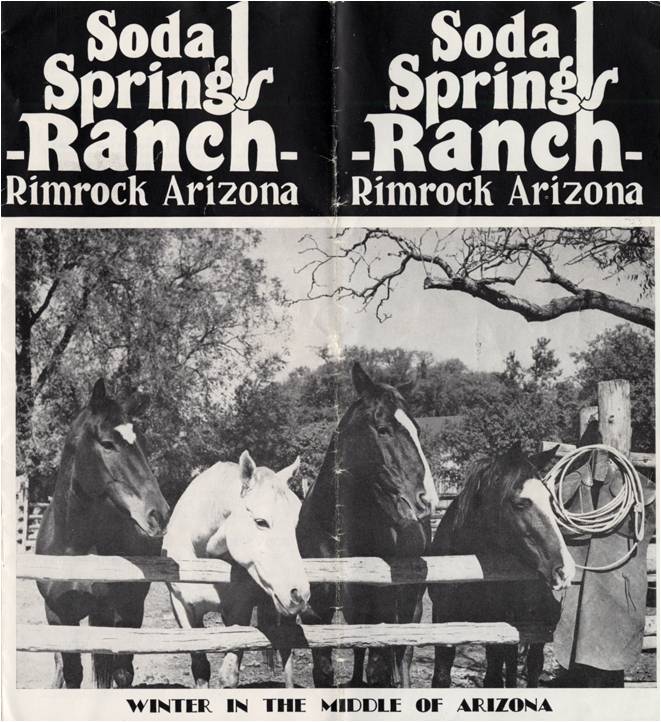 Communicating with guests after they went home was very important. Dude ranchers wanted to create relationships and repeat visitors, and one way to do this was with regular mailings, which sometimes turned into souvenirs themselves. Larry Larom, who co-founded the Valley Ranch outside of Cody in 1915, was especially good at this. He was also one of the organizers of the Dude Ranchers’ Association and served as its first president when it was founded in 1926. He sent out cheerful letters about the ranch to former guests in the off-season, and always included a sprig of local sagebrush in the envelope.

In the 1920s Larom started writing the Valley Ranch newsletter, Corral Dust, which he also sent to his previous visitors, along with his signature piece of sage. Many ranches soon began publishing their own newsletters and also sent out Christmas cards.

Postcards easily forged a connection between ranchers and dudes. These have been around since the 1860s in various forms, and in 1907 postcards featured images on the front, with a place for both a message and an address on the back. By the late 1930s, dude ranch owners could print up images of their ranches for guests to buy and send to their friends. Many people kept the cards for themselves as a souvenir. Postcard companies also created generic illustrations of dude ranch life, and so did railroads and airlines. These were also on hand for guests to enjoy and keep. 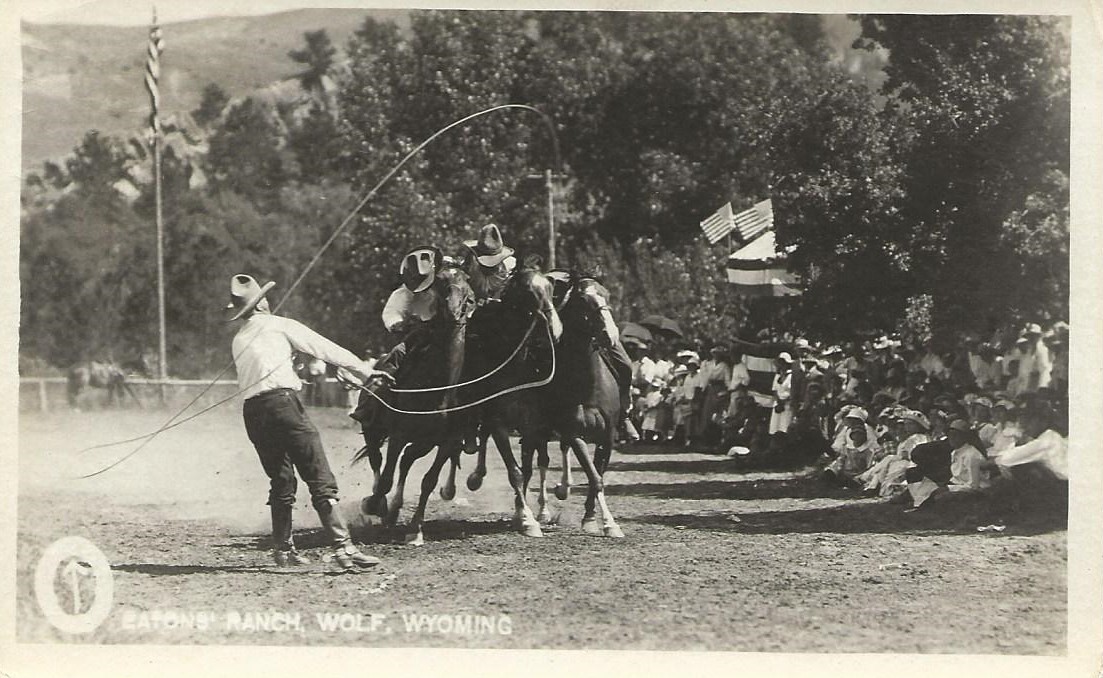 Cameras were popular and affordable by the early 20th century, and who knows how many photos of dude ranches are in family photo albums today. Some ranchers got into the act themselves and gave specially printed souvenir photo albums to their guests. One of them was the Jack & Jill Ranch in Montague, Michigan (Midwest “dude ranches” were controversial at the time, but that’s another subject). In the 1940s the album included a map of the ranch, a letter from the owners, photos of the owners and wranglers, a place for “Friends” to write their name and address, two pages of lyrics to popular cowboy songs, goofy drawings of dude ranch life, commemorative photos, and blank pages for guests to use for their own photographs. Visitors to Jack & Jill also received a wooden pin with the ranch logo and their name written on it in dark ink. 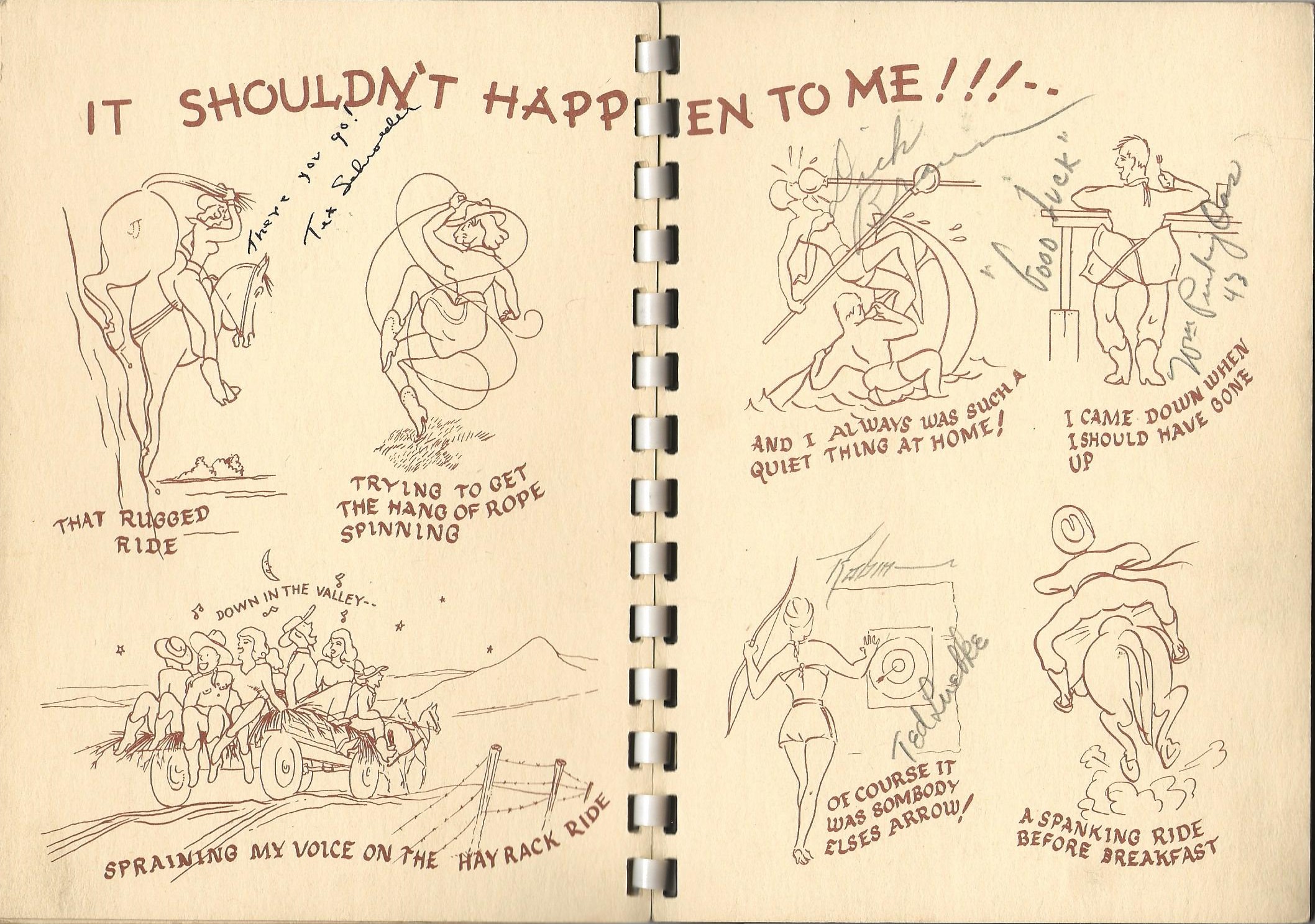 Speaking of ink, before the widespread use of the ballpoint pen in the 1950s (when the price came down) everyone used fountain pens to write with. The inked letters stayed wet for quite a while so most people used a blotter or heavy, absorbent blotting paper to dry them more quickly. Businesses of all kinds took this opportunity to make and give away blotters with their logo or advertising images on the front, leaving the back blank to use as the actual blotting paper. Some dude ranches did the same. You could use these quite a few times, which meant that after you went home from your vacation, you would remember the dude ranch every time you wrote a letter or signed your name.

Some giveaways had even more practical uses. If you watch old movies, you’ll note that nearly everyone was a smoker. Souvenir ashtrays were common souvenirs through the 1980s. Dude ranches often bought branded ashtrays for guests to use, and to take home. Some were pretty generic – just glass with a logo. But some were in the shape of cowboy hats, horseshoes, spurs, or other western designs. Matchbooks were just as common as branded ashtrays, and a lot cheaper to make.

Clothing with logos or advertising, such as tee shirts, started appearing on the shelves of dude ranch gift shops in the 1960s. These were aimed at younger visitors, the Baby Boom generation, which adopted the tee as a uniform.

Guests also have fond memories of the great meals served at ranches. Recipes for dude food appeared in The Dude Rancher magazine as early as the 1930s, and guests often took home informal collections of recipes and souvenir menus. Starting in the 1970s many ranchers got the idea to print up cookbooks with the recipes from their own kitchens, which they sold to guests (and some still do). A few examples are the CM Ranch in Dubois, WY; Covered Wagon Ranch in Gallatin Gateway, MT; and Medicine Bow Lodge and Adventure Guest Ranch in Saratoga, WY.

Dude ranchers have been creating souvenirs for over a century. They know what their guests want, and today’s branded memorabilia reflects what is meaningful for 21st-century dudes. What will the next decades bring? You may not be able to get a t-shirt or coffee mug from when your favorite dude ranch first started, but you will more than likely be able to get one now! If you do not have a favorite ranch, you should consider finding the perfect dude ranch for you. Contact the Dude Ranchers’ Association today at 307-587-2339 or info@duderanch.org and they will help you find your dream ranch vacation. To learn more about dude ranch history, visit the Dude Ranch Foundation website.

Lynn Downey is a historian and author from northern California. Her historical novel, Dudes Rush In, comes out this summer from Pronghorn Press. She is also writing a history of dude ranching which will be published by the University of Oklahoma Press in 2022.