Best wishes for your Christmas Is all you get from me, ‘Cause I aint no Santa Claus— Don’t own no Christmas tree.

But if wishes was health and money, I’d fill your buck-skin poke, Your doctor would go hungry An’ you never would be broke. 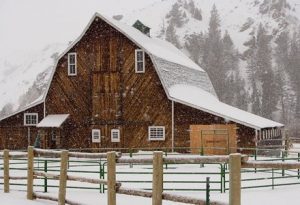 A Bar A Ranch’s Barn in the Snow

May you all have a safe and happy holiday season and bring in 2017 for the best year yet. From the Dude Ranchers’ Association, your dude ranch planning resource since 1926.

Here is a great article on the History of Dude Ranching for some light reading during the holidays for a Merry Christmas Dude Ranch Style Dude ranches sometimes get short shrift in history because they’re seen as contrived, Hollywood-derived entertainment, distant from the real work of Wyoming’s agricultural and resource-based industries. In its 1920s heyday, however, dude ranching was a common and respected way for elite Americans to experience the West. The fact that many did so in Wyoming not only bolstered the regional economy and culture, but also shaped national ideas about Western identity. In many ways, dude ranching emerged as an extension of guiding. As Euro-Americans explored the West, they often hired experts to help. After President Theodore Roosevelt took office in 1901, his earlier, much-touted experience on a North Dakota cattle ranch often led visitors’ interest in hunting and sightseeing to merge with interest in ranch lifestyles. Howard, Alden and Willis Eaton—brothers from a prominent Pittsburgh family—are widely credited with running the first dude ranch. Howard established a ranch near Medora, Dakota Territory, in 1879, with his brothers soon following. After the Northern Pacific railroad arrived the following year, they frequently had guests from back east. In 1882, one guest, Bert Rumsey, insisted on paying Howard for his troubles. By the following year, the Eatons had so many paying guests that Howard started taking them on pack trips where they toured Yellowstone National Park… Read more here.   Save Save Save Save Save Save Save Save

The Best Sunrises in the West