To spend a summer in the pristine mountain wilderness of Southern Colorado is a beautiful gift denied to most. I, however, was given that privilege. There are no words that will be able to adequately describe the adventures I had, the landscapes I saw, or the relationships I formed—but what are words for if not to make a feeble attempt at such a thing? 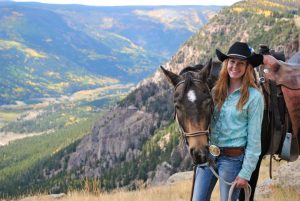 About 30 of us showed up at Rainbow Trout Ranch in the middle of May, ready for a brag-worthy summer job. I was one of two that was lucky enough to receive college credit for my time, though for  me that meant stumbling my way through an office position that my brain was unfit for (despite being a fresh college grad with a business degree). Friendships were formed instantly, through pre-season raking, hilarious games of Apples to Apples, and full-staff nighttime outings.

It wasn’t long before we were weeks into the season, meeting dozens of new guests every week and doing our best to make each day special. Despite early mornings and working close to 50 hours a week, the summer was nothing short of unforgettable. Granted, I spent more time waiting for e-mails to load and copies to print than I did enjoying my affinity for the outdoors, but my job taught me a lot and my days off made for the most incredible adventures. Over the course of eighteen weeks, I did everything I wanted to do and more. I climbed waterfalls. I jumped in the river during a rainstorm. I danced, a lot. I took a 36 hour road trip to Utah, in which I car-camped, visited two national parks in 105 degree heat, and had the time of my life in a beautiful hidden swimming hole in Moab. I rode dozens of horses up and down mountains and through vast meadows and rivers. I was caught in a torrential storm with lightning strikes that were far too close for comfort. I learned to fly-fish, and took nearly every opportunity to do so—most notably packing out a number of miles on horseback to fish Elk Creek all afternoon in complete serenity. I climbed (though, failed to summit) Mount Blanca, Colorado’s fourth tallest mountain. I learned the sport of team roping under the instruction of some incredibly talented people and horses. I took hammock naps beneath cool mountain pines. I caught my first four trout and was giddy with the excitement of a kid at Christmas. I shot assault rifles. I attended rodeos. I made the most unlikely of friends and shared endless hours of laughter with them. I traveled through the state of Colorado with good company, savoring summer with the windows down and accepting wherever the road took us.

When you have one day off a week, you don’t waste it by sleeping in. Amidst the excursions, I enjoyed the company daily of the fine folks that traveled from around the world to spend their vacation with us. This was without a doubt the most fascinating aspect of my job, because mealtimes meant hearing the life stories of men and women whose lives were vastly different from my own. Families came from England, Italy, New Zealand, and Japan. I met pastors, gym teachers, stay-at-home moms, and car mechanics. I also met film directors, finance executives, brain surgeons, and a member of the LAPD. At the ranch, however, work uniforms and three piece suits are exchanged for wranglers and cowboy hats, and suddenly that big-wig lawyer that makes more money than I can even comprehend just becomes a dad and a husband that may be a little apprehensive about loping his horse for the first time. The “real world” is simply left behind, and worries and stresses from home are temporarily forgotten while the west takes over. 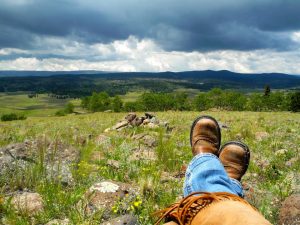 While I wish I could go into detail on everything, there is one day from my summer that stands out among the others. It was a Thursday that I had off, and I chose to do the back-country ride with about six other guests. The back-country is an advanced all-day ride that traverses out of the valley and up to what feels like the top of the world. My boss, Jane, put me on a horse named Chugwater, named for Chugwater, Wyoming. I hadn’t ridden him before, but I fell in love immediately. He wasn’t the prettiest thing—small, with funny conformation and a Mohawk for a mane—but he was fun to ride and one heck of a mountain horse. Trying to describe the scenery is futile. We could see for miles over expansive meadows and forests, with mountain ranges serving as the perfect backdrop. Rolling golden hills stretched out before us as if the entire world was ours for the taking. Soon we came to a turn in the meadow where Jane just let us go. “If you want to ride slow, ride slow. I’ll be back here. But if you want to run…run.” These are the words I’d been itching to hear all summer. I had competed in some speed events in high school—barrel racing, pole bending, keyhole. But an arena is limited; there is a definitive end. Not the case here. Chugwater was chomping at the bit. All I had to do was move my hands forward and drive my heels down and he took off, racing by all the other horses as we galloped through that beautiful country. To say that I felt like I was flying may be a little cliche, but few other terms can describe the phenomenon of 1,000 pounds of muscle surging underneath you at such fast speeds. Time stopped for a minute and all I could hear was my horse’s breathing and the thunder of his hooves until he came to an exhausted halt. We had a blast together, and it wasn’t even lunchtime yet. Isn’t this the dream for every horse lover? 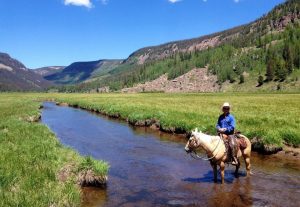 The rest of the ride was similarly stunning. We loped along a canyon’s edge, and I knew I had seen identical scenes in some of my favorite horse movies from my childhood (“Flicka,” anyone?). We walked spread out, talking and laughing and enjoying each other’s company. Dark grey clouds gathered and it started to rain at one point, but nothing could dampen my spirits. A while later we split into two groups for another lope, and soon I found myself racing alongside Cameron, the only other summer staff member on the ride that day. Our horses ran through the hills and we laughed at the rain as we got soaked through to our skin. We stopped at the top of a meadow and turned our horses around to watch the rest of the riders hoot and holler as they loped up after us. The ground was shaking and the skies were opened. Cameron simply turned to me in that moment and said, as more of statement than a question, “How lucky do you feel right now?” In the hours after that, we maneuvered our horses through rain and hail to see views of endless aspen forests and foggy cliff faces, each panoramic being more breathtaking than the last. We all shared jokes and stories from our far-away lives in big cities, and when it finally came time to ride back down into the valley, we sat exhausted in our saddles, allowing our horses to do all the work of picking their way through the rocky mountains. My clothes may have been drenched and my knees sore, but my heart was full. That was, without a doubt, the best ride of my life. I still feel so lucky. This past summer was one that I’ll share about for the rest of my life, though my dude ranch adventures are far from being over. Today, I move to Wyoming to begin a new season on another ranch, and I know if the friends, stories, and memories I create there are even just half of what I experienced in Colorado, I’ll be happy. I am living the life that I dreamed of as a little girl, one with horses, mountains, and wide open spaces. “Lucky” doesn’t even begin to cover it.